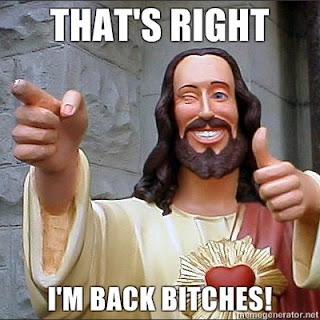 Well I took a bit of a break. And instead of posting an idle thought here and there I took a page out of Brent’s book from Strictly Average and just stopped posting. I should be back on a relatively regular schedule now but more importantly I’m in a good place to write about my hobby again which my recent break made possible. No one wants to feel like writing for their blog is a job instead of a hobby (unless it is their job).

Anywho this is mostly a catch up post of what’s been going on with a couple of lists and articles scheduled to post over the next two weeks.

I have to say the more of 6th I play the more I like it. The armies I’m running into are far more diverse. I’m seeing things like Tyranids and Tau on the tables again. I’m seeing crazy allies and some pretty cool stand alone lists. Some great conversion for aegis lines and weapons for race specific stuff. Mostly I’m just seeing a pretty heavy resurgence of the GW hobby in my local area which I think is great.

Let’s get into a few specifics about what I’m seeing:

1)     Flyers aren’t dominating the locally or apparently abroad. A 5+ flyer army hasn’t pulled down so much as an RTT win locally and I honestly don’t expect it to happen any time soon, if ever.
2)     I’m rolling a ton more dice than in 5th. Granted this is in part related to some of the lists I’m playing (which will be posted later) but there is definitely and upsurge in the number of dice. However the game mechanics seem to be faster. Even against people who aren’t 100% on the rules and with larger armies I’m still finishing turn 5 in almost all my games and generally finishing naturally.
3)     Which brings me to this; armies are getting bigger. There are more boots on the ground than in 5th and I find I’m considering a list to light on boots if it’s got less than 60 models. Which is a pretty crazy departure from 5th.
4)     Psykers, while not game breaking, are extremely good force multipliers.
5)     Vehicles/Transports are not dead, their use has changed.

That covers a few of the things I’ve been seeing and I’ll go into even more detail later. Gotta have something to write about after all J.

So what have I been up to lately? Outside of getting sucked back into WoW for almost a month before breaking the chain again I’ve pretty much been playing locally and hitting up some RTT’s. I also played in a local “GT” in which was in its first year and only had 16 people show up. It was a fun event and I’d recommend it again next year but I hope it grows. Which it should assuming they get the word out sooner and don’t schedule it for the same weekend as a popular Fantasy GT and the FFG World Championships. I’ll be attending next year to see if I can defend my win this year.

For those who don’t know I’m in the Frozen North () and we have a pretty lively gaming scene up this way. We got a prep league started for a local GT that is in March but at the same point value as Adepticon so it doubles as a practice league for that as well. It’s three games a month with the same list and then you can tweak or completely change your list for the next month.

I’ve pretty much hung up my GK’s locally after the local GT to start trying some other stuff. Even though I do love my walking strike list and other lists I’ve played with them I feel it’s time to start getting something cool together for Adepticon and since I want it to be stunning I’m starting now. Before moving on I wanted to share some of the Henchmen I painted up for my GK’s for the local GT: 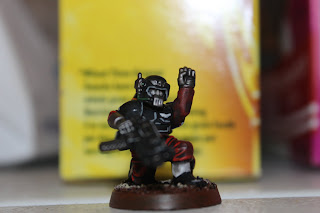 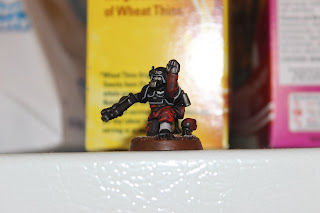 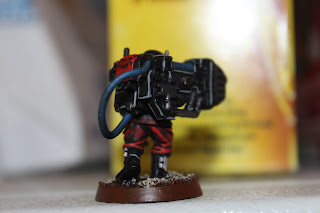 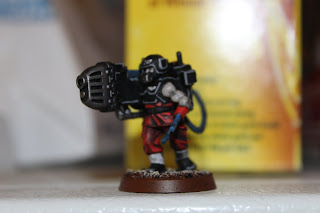 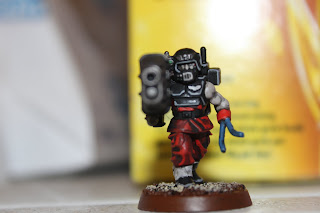 I’ve been working on an Iron Warrior themed army which is currently all over the place. Basically my new counts-as marine army with themed allies from several books to attach to it. I’m loving the way the models are turning out. Here is an example of what I’ll be using for my Chaos Spawn that I’ve gotten painted up:

I’ll be posting up images of other parts of my army as I finish them. Let’s just say my poor wallet is hurting a bit after the Black Friday sales as I took the chance to grab most of the bitz I needed to finish at least two of the larger Iron Warrior related projects I’m working on.

My team and I will be returning to Adepticon this year to defend our title and I’ve already squared away my room as well as my tickets to the Champs and Gladiator. I’m excited for a chance to play in the Gladiator this year since I picked up Dream Forge Leviathan and some extra arms that I intend to run as a Warhound. Obviously I’d like to qualify for the championship bracket but let’s be honest, it hasn’t happened the last two year so I’m not expecting it to happen this year. With all the crazy 6th edition has brought it’s anyone’s game.

I’ve registered for the Indy Open in March which I heartily recommend to anyone. It’s in and the info can be found here: http://theindyopen.com/. I’ve also registered for a local GT that sold out last year known as The Dark Star and again, I’d recommend it. Great event that is expanding from 64 players last year to 80 so sign-up if you are interested. Here is the info for this one: http://darkstargt.com/index.html

I’ll also be grabbing a ticket to the Bugeater here in the next week or so. So many GT’s are selling tickets 6 months in advance of the event it’s kinda crazy to be planning for next year’s events already but I’m glad to see the event scene is thriving.

Well that’s it for now. Check back for some of my deeper thoughts on where 6th is currently at, army lists, list building, allies, and unit relation/integration articles.
Posted by Hulksmash at 5:00 AM