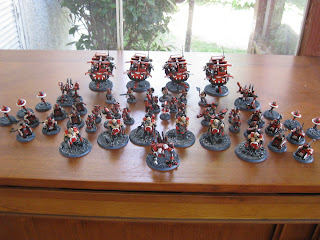 I've been wracking my brain since I got back from the Indy Open about what my next project is going to be. So far this year I built and painted a GK army that has gone 10-1 over 2 GT's and now it's time to change up a bit. As most of you know I'm easily distracted and lately Daemons have been on my mind.

Now I have a soft spot in my heart for Daemons. I've never loved nor loathed an army so much at a tournament. You can see pictures of my Admech counts-as army in the army picture tab and I really am proud of how those turned out. I ran it at 2 GT events and at both events had that dreaded drift game where everything went wrong and my urge to kill rose. My Daemons actually accounted well for themselves but I admit I got a little frustrated with the lack of consistancy. But I've had my fill of consistancy it seems since I'm seriously considering Daemons for at least Adepticon if not the local GT in May as well and maybe more.

So that brought me to my main issue. Do I add models to my existing converted army or do I rebuild it from scratch? Well I've wracked my brain and come up with several fun themes for a rebuild like:

Well weekend before last I braved the weather and snow to travel down to for the first GT in at the Indy Open. It was quite a haul thanks to the weather but worth the trip. This is one of my GT reviews and will rate the various important aspects of the event and also have a small list of ways to improve it going into its second year. I review on a Great, Good, Average, Needs Improvement, and Bad scale. Onto the review!

The event was run by the local group of pretty competitive gamers down in the area. It was the first event they’d ever run and I can honestly say I had no idea what I might be getting into. That being said I knew the guys running it and had high hopes J
Read more »
Posted by Hulksmash at 8:23 AM
GT Review: The Indy Open
2012-03-12T08:23:00-07:00
Hulksmash
GT Reviews|
Comments

Off the Shelves and Outta the Warp - 1,850 Daemons 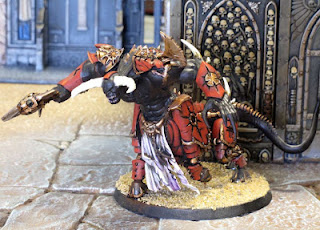 Well damn Brent anyway but he’s got me thinking about running Demons again. Now I’d probably paint up an entire new army as I’m slowly shifting my converted admech over to a pure guard army since I know it’s not everyone’s cup of tea regarding WYSIWYG.