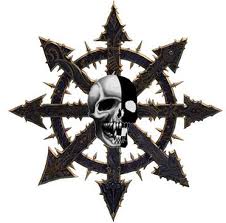 This is the first in a series on armies and the changes 6th has brought to them. We’re starting with Daemons because I think they got an enormous boost in this edition and will be a ton of fun to play.

-GK Warpquake
-Random Deployment
-Reserve Dependency
-Lack of Anti-tank
-Limited useful units
-Lack of Viable units w/Grenades
Now that doesn’t cover all their issues but it’s a solid start. So let’s start with basic rule changes that will affect how daemons play.
The first and easiest is obviously the change to how reserves work. First off no more null deployment (outside of 100% drop pod armies) which means you can at least focus your initial drop on part of your enemy. Let’s follow that up with a 3+ to come in on turn 2 and 3 with any remaining units dropping turn 4. That’s a pretty solid change all by itself.
and Beasts got a boon. Difficult terrain doesn’t slow either of them and beasts ignore the possibility of dangerous terrain entirely.
New “Look Out, Sir” rules help keep heralds alive which means possibly not needing a chariot!
Grenades hit on weapon skill now so your friendly screamers just became the ultimate vehicle hunters with their potential 24” assault. Oh, and they can use them against MC’s which is just hilarious.
Flying MC’s….need I say more?
Hit-n-Run now transfers to the unit and uses the highest leadership so those Slaanesh heralds on foot and mounts could be extremely nasty.
But it’s not all roses since your Bloodcrusher & Bloodletter swords went to AP3, FnP went to 5+, and slow-n-purposeful means no running with your Plaguebearers.
Now the first non-rule boon is the Aegis lines w/comm systems. Re-rolling your reserve rolls is pretty big and since you’re opponent has to choose between shooting the small unit you use to man the comms/score your home objective behind the aegis line or shoot your beastly cc squads that are in threat range you’re likely to be able to pull this off.
I can hear you asking “What got better? What got nerfed?”
The answer is slightly complicated. I feel like the rules themselves have given us a pretty solid leg up moving forward but made unit selection twice as important as before.
Everyone remembers the old list that people kinda settled on before DE:
4 Bolt Chariots
3x6 Fiends
5-6x5 Plaguebearers
3xDP w/Bolt and stuff
After DE there was a switch over to sometimes include bloodcrushers or to slip in some beasts from fast attack but the above was widely considered one of the more consistent and better builds.
Well now we have options. I’ll start with the units.
Heralds:
Well say goodbye to chariot heralds. With the new improvement on ranged shooting and the new LOS rules you’ll probably find it’s better to hide inside a unit. Also with the change to vehicles bolt chariots aren’t as essential as you don’t need those bolts like you used to. So that being said some heralds really standout. The Khorne Jugger herald just got a massive boost in survivability and deadliness. Tzeentch Heralds can still rock the chariot or hide in squads of horrors now. But the single biggest winner is the herald of slaanesh…..
Hit-n-Run now transfers if a single model in the unit has it. That’s right. Large squads of daemonettes or mounted daemonettes now hit-n-run just like fiends. That is just downright nasty.
Greater Daemons:
Well Keeper is still pretty poop and the Unclean One took a hit with his FnP. However the Bloodthirster and LoC got massive boosts thanks to the Flying MC rule. They are even harder to hit and can lay out some solid damage via vector strikes, combats, or shooting attacks (LoC).
Fiends & Bloodcrushers:


I’m not even going to include Beasts but feel free to give them a roll. These two units though have been the staple of many of list in 5th edition. Bloodcrushers for their wound allocation and the Fiends for their sheer destructiveness. So for the Fiends you’ve got a unit that is fleet and ignores difficult terrain. This is great because you can start your assault in cover and if you fail it at least you have a save. I’m hoping they release that moves through cover mean you strike at normal initiative but until then Fiends are just pretty darn good, not amazing. As for the Bloodcrushers they’re power went down with the AP3 ruling but if you put a herald in them then they are even more wound allocaty (yeah, I made up a word) than in 5th.
Flamers:
Oddly better. Not sure if they out do the old stand-bys but a single unit of 4-5 can strip quite a few hull points off of parking lots. Makes them a massive target but they do have some utility. The best part being the ability of 4 of them to gib a landraider on the drop.
Daemonettes:
These guys are where almost all of the new 6th edition rules culminate for an awesome unit in this codex. First they are the cheapest of the troop choices that can actually score. Secondly they have fleet which now improves their chance to reach on the charge. Add a herald for 65pts and the unit has hit-n-run. I almost crapped my pants before I read the Daemon FAQ and realized that Aura had been changed to do what offensive & defensive grenades used to do without any of the additional rules.
Bloodletters:
Are a little bit weaker. I’m not gonna lie. The drop to AP3 hurts, overwatch hurts, lack of any other special rules hurts. Overall this unit got hit pretty hard.
Horrors:
Sheer number of shots is fun and the ability to pull models from the front rank is nice but overall with the lifting of the need of ranged shooting to kill tanks I feel these models may slide out of the way for a bit.
Plaguebearers:
Can’t run, can’t go to ground, and their FnP went to 5+. A single unit to hold objectives maybe but I see their usefulness slipping outside of cheap troop choices to get access to daemonic allies.
Flesh Hounds:
Benefit from the beast special rules. Coming thru cover means a 5+ save which is nice though they’ll still strike last. But the enhance speed and assaulting through cover might help. This unit’s usefulness will depend on the proliferation of GK’s in the next few months.


Mounted Daemonettes:
All the same things as the Daemonettes on foot but faster. You do have to worry about Dangerous Terrain but I think this unit with it’s large landing footprint got a massive boost.

Holy poop on a popsicle. These guys got buff. No only did their potential assault range increase but the changes to grenades and vehicles make them nasty. Oh and let's not forget their ability to down an MC with St8 AP1 melta bomb attacks in CC (granted only one each at I1). Basically drop a squad of 10 and watch any opponent with armor or MC's crap his pants.
DP’s:
Flying MC’s!!!! Keep them relatively cheap. I would personally recommend the flame template as with the vector strike and this you’re in good shape for laying down some hurt. Armor is pretty essential and you could bump to Tzeentch for a 4++ or go Slaanesh for H-n-R. Nurgle would give you a poisoned 2+ reroll in cc if you give him might. Pretty much any of them but Khorne is likely a solid choice. I see a lot of these fellas cropping up over the next few months.
Soul Grinders:
Some of the same issues as 5th. They also die due to hull points now and pay for abilities that everyone pretty much has. Personally I’d be focused on flying DP’s.
So what does this all mean for Daemons? There are now options!!!!!
Our troops can kill things now with consistency. Units in Fast Attack and Heavy Support got solid boosts. And most of our elites got a slight bump. Basically between all the bumps and the rule changes Daemons are going to be plain nasty. But since I've already written out a book I'm going to cut it hear. I'll walk through building an army list with the book later this week.
Thoughts?

Posted by Hulksmash at 5:00 AM