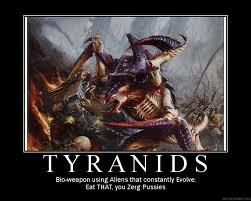 I’ve seen a ton of screaming around the internet about more “nerfing” by GW when it comes to Tyranids. Well I want to take a look at Tyranids myself to get a feel how one of my favorite armies (right beside orks) is actually going to perform in this new edition. Bear in mind this is all without extensive playtesting of the ruleset at this point and no tournaments to speak of yet. Though I will be playing a couple of games this week to get the hang of the system and have 2 RTT’s lined up in the next few weeks.


Let’s start with the negatives so I can then move on to what I see as pretty significant bumps:

- We’re done assaulting out of outflanking or infiltrating.

- Our average charge has dropped on all of our fleet units with the potential to simply reach the same charge distance as before.

So those seem to be the major complaints from the internet but let’s get into some of the things I think got a bit of a boost:

-MC’s get cover like regular infantry! That’s right, gaunts give your Trygons cover!!!

-The meta shift to more foot from easier to glance to death
transports/only on foot units scoring means a big boost for bugs in general. Though this shift may take a while, start painting those bugs J

-Poison means re-rolling to wound on good numbers instead of 4+ (Trygons re-roll to hit and wound!!!!)

-Hitting vehicles on 3’s or automatically means Gargoyles w/Adrenal Glands will be knocking out AV10 rear armor left and right.

-Broodlords can get actual cool powers now and are pretty useful.

-Preferred enemy on Tyrants means missing 50% less of the time with Hive Guard and re-rolling fails to wound with them when not shooting vehicles. Also lets Devgaunts shoot almost marines J

That’s a pretty decent start though I’m sure I’ll find more to mess with later. Here is where I think I’m going to start from. This would be for Nova so it’s 2k with a single force org. Keep in mind it’s a very, very rough draft J

I’m actually not 100% sold on the troop selections or the Harpies yet but it’s something fun to consider. Especially since I’ve got a decent shot of downing a sergeant in CC with the Parasite and then Look Out Sir will help with the rest. The wound shenanigan fun with the prime and carnies is also something I want to try. It’s really rough but I’m liking the direction. Though I get the feeling my final list isn’t going to look much like the final 5th edition list.
Posted by Hulksmash at 3:49 PM