Dashofpepper at the Railhead Rumble GT: Game One

June 10, 2011: Dashofpepper makes the drive the Dallas, TX for the Railhead Rumble GT. I arrived in Dallas, checked into the hotel, picked Hulksmash up from the airport, and headed to the Sheraton to scope out the GT area of A-Kon.
19,200 mostly 16-25 year olds swarming an anime convention…an hour after arriving and pushing our way through dressed up (or undressed) anime fans, we finally discovered that the GT was in the attached Marriott and made our way there to check it out. I’m glad that we did an advance recon, or we would have been extremely late the following morning, which is probably why the GT was an hour late kicking off – others weren’t so fortunate!
I brought my Dark Eldar to the Railhead Rumble. The list is as follows: 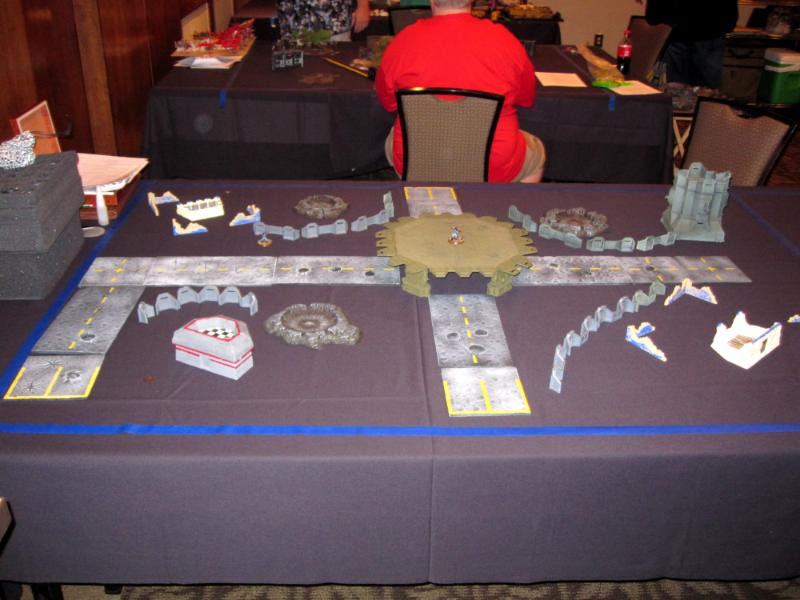 We place one objective in the center, and roll for deployment option. I win and elect to deploy and go first, and choose the side I’m taking pictures from. I place my objective in his deployment zone 18” from the center objective and out in the open – I don’t want something to be able to hide behind the BLOS terrain to jump onto it. In return, he places his objective in my deployment zone in the rear left – the brown marker on the table.
I get +1WS for combat drugs! 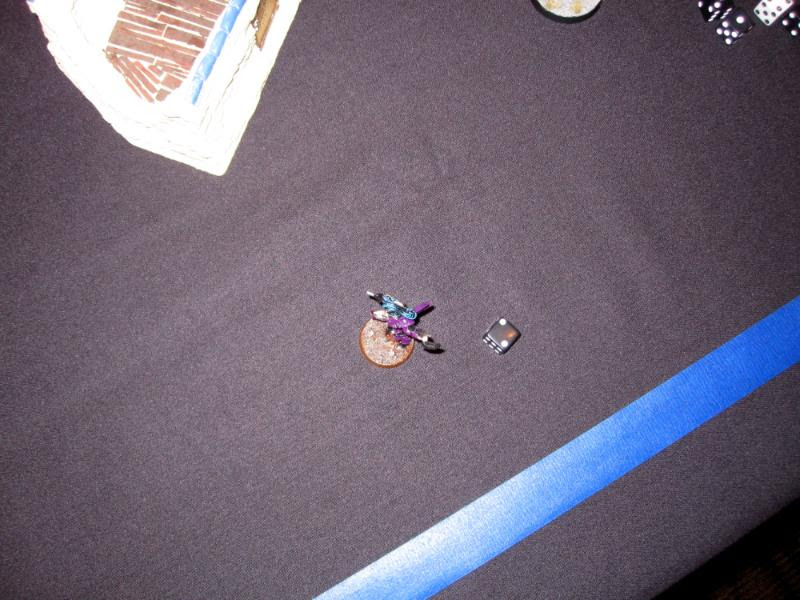 I deploy in full DoW reserves, and he places his pathfinder squad with a Farseer into the crater in his deployment zone. 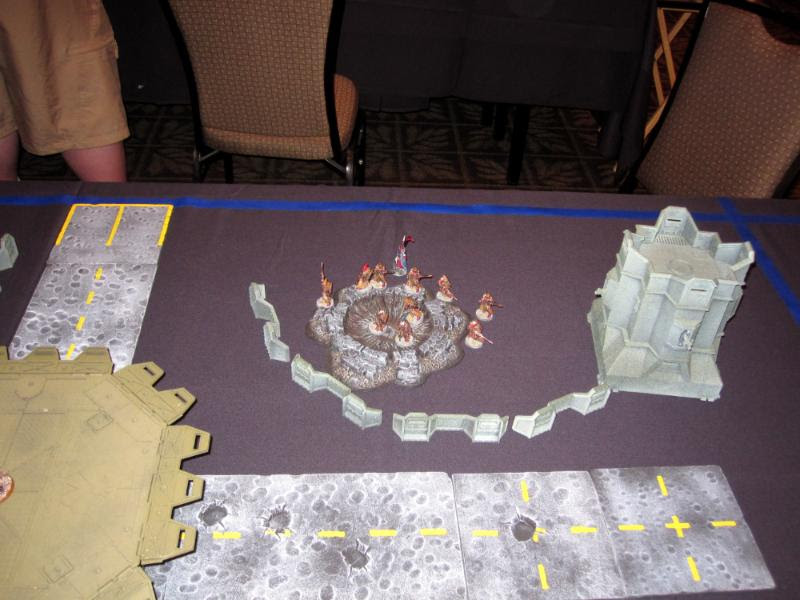 Dashofpepper Turn One:
My entire army moves in flat-out from reserves. The haemonculi is in the raider with the wyches. 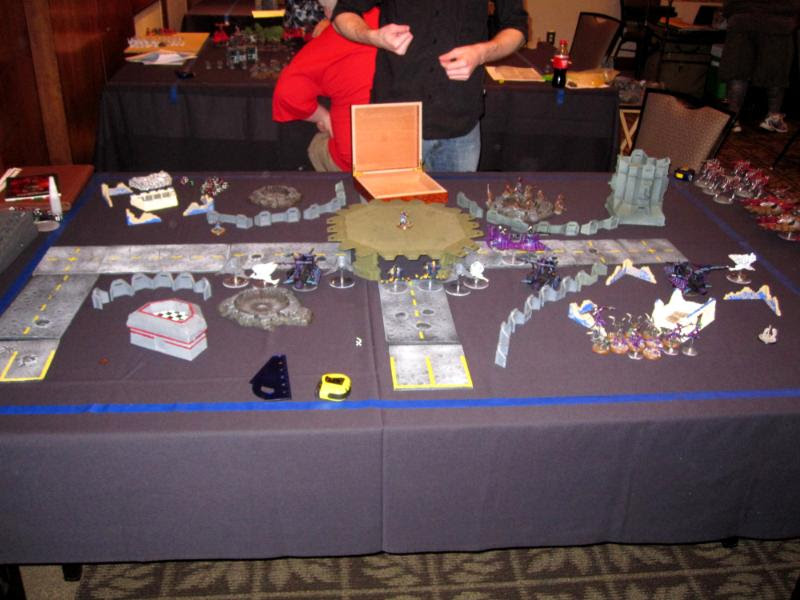 My beast unit with Baron Sathonyx moves on and runs as well, trying to get up the field. 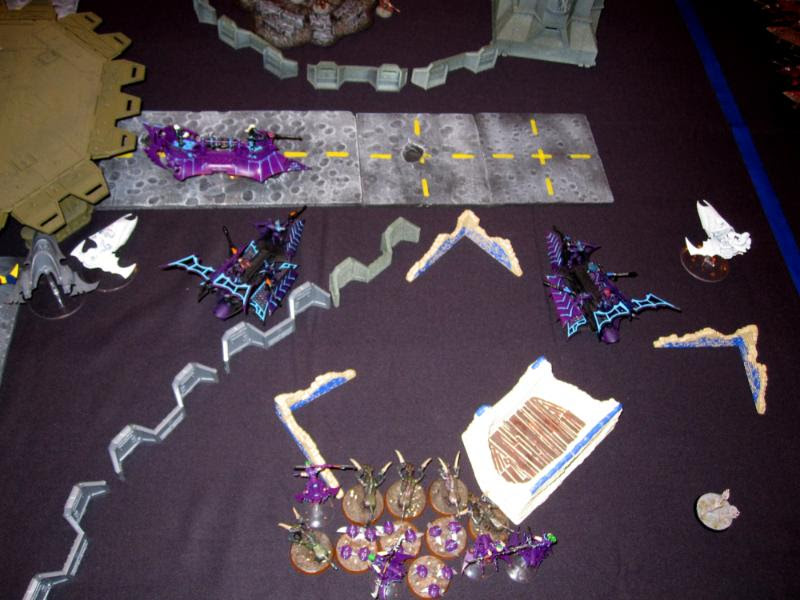 I’ve chosen to congregate around the middle of the table; most of my army is hanging out 16-18” up the board; I don’t want him to have an easy time ranging me with nightfight, but I don’t want to be out of range the next turn if he hugs the board edge. My ravagers would usually hang back further, but I’m concerned about the giant piece of terrain in the middle and the BLOS piece of terrain on the right and being able to see around it from whatever angle I need, so I’ve moved them up further than I usually would. 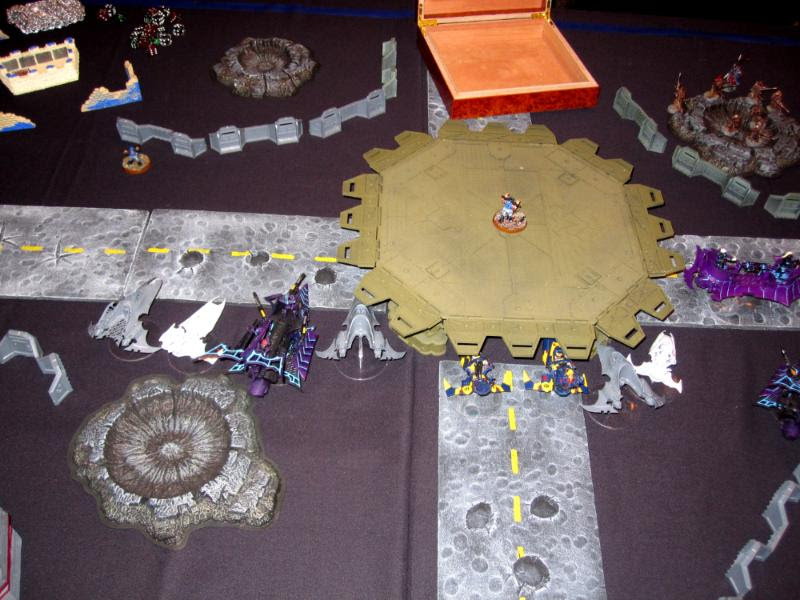 Enemy Turn One:
His War Walkers move on 6” behind the pathfinders., with one of the units using the BLOS terrain to partially screen itself. 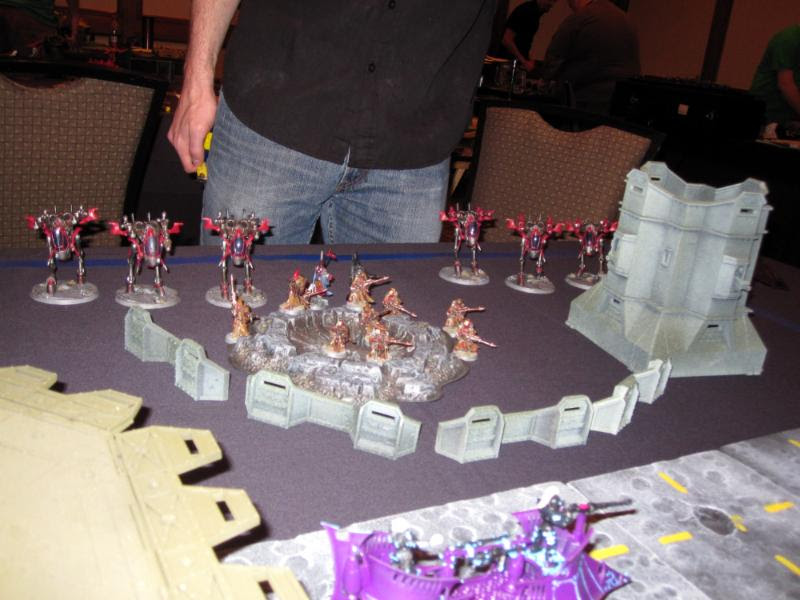 The Fire Dragon Wave Serpent moves on 12” on the other side of the BLOS terrain. 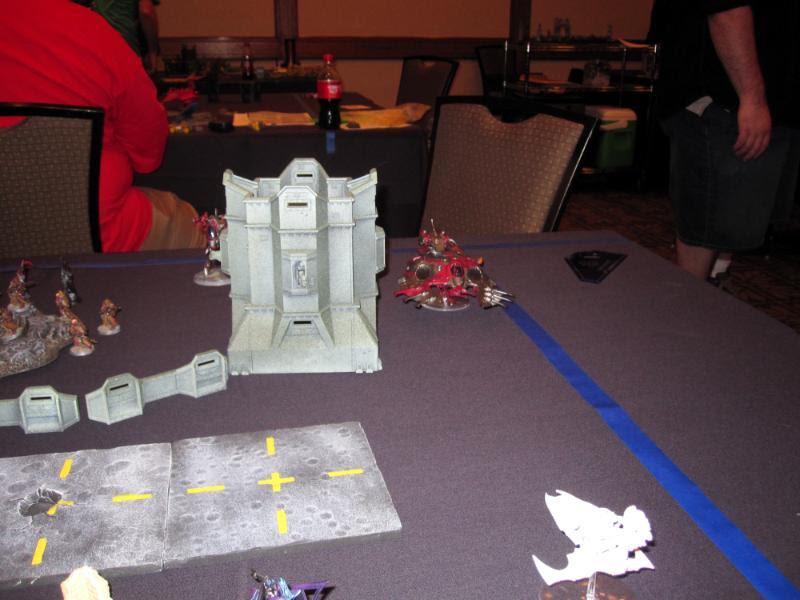 The Storm Guardians come in on the far left by the objective. 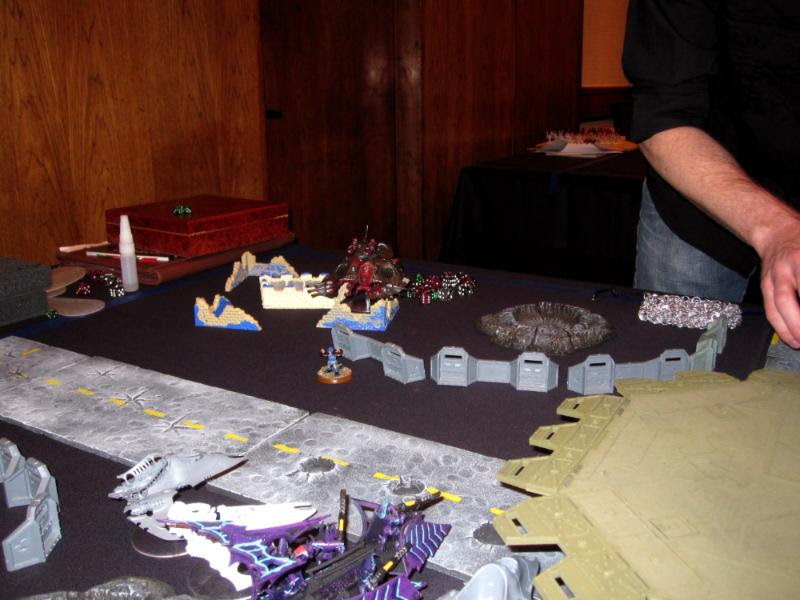 The wraithguard wave serpent comes in center-field next to the pathfinders, and his other Farseer moves on 6” and joins the Rangers with the other Farseer.
He actually made most of his nightfight rolls, but between his rolling to hit, penetrate, and cover saves, I escape unscathed across the table, except for my wych raider, which is stunned.
Dashofpepper Turn Two:
On the left, my trueborn venom and troop venom shift up 6” to make sure they have 18” range on the Storm Guardian Wave Serpent. 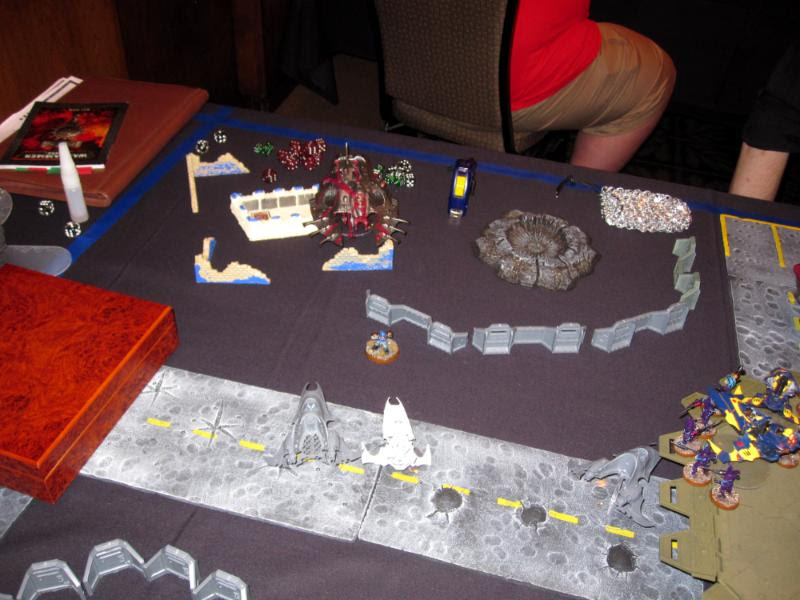 In midfield, I’ve chanced dangerous terrain to put several of my vehicles on top of the platform, with one troop venom peeking around the edge at his wraithguard transport. Since I’ve moved 12”, I basically disembark everything to get those blasters firing. I also line up a ravager to shoot at some warwalkers. 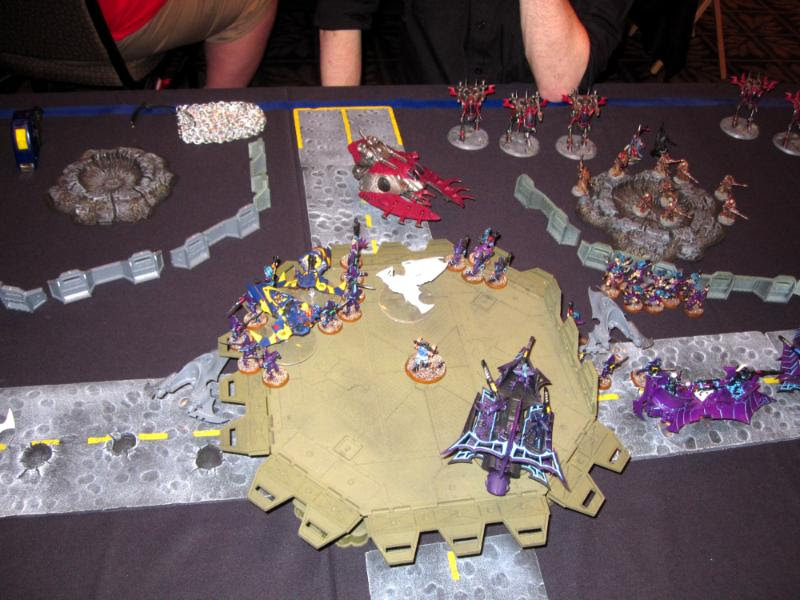 My wyches have disembarked and moved up as far as they can without having to roll difficult terrain – they still get 4-5” of movement after a 2” disembark, but I’m afraid to roll difficult terrain for fear of not even getting that far. My beasts also move 6” forward and run.
On the right side of the board, my two ravagers also line up to shoot at war-walkers, while my trueborn venom on the right moves up a couple inches to shoot at the fire dragon Wave Serpent. 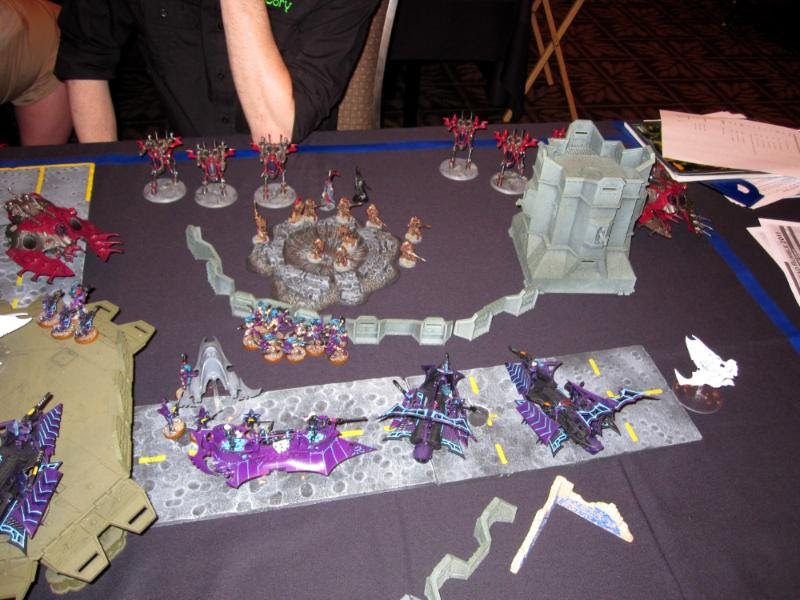 I open fire!
My trueborns open up on his Fire Dragon Wave Serpent, but only manage to glance and shake it. 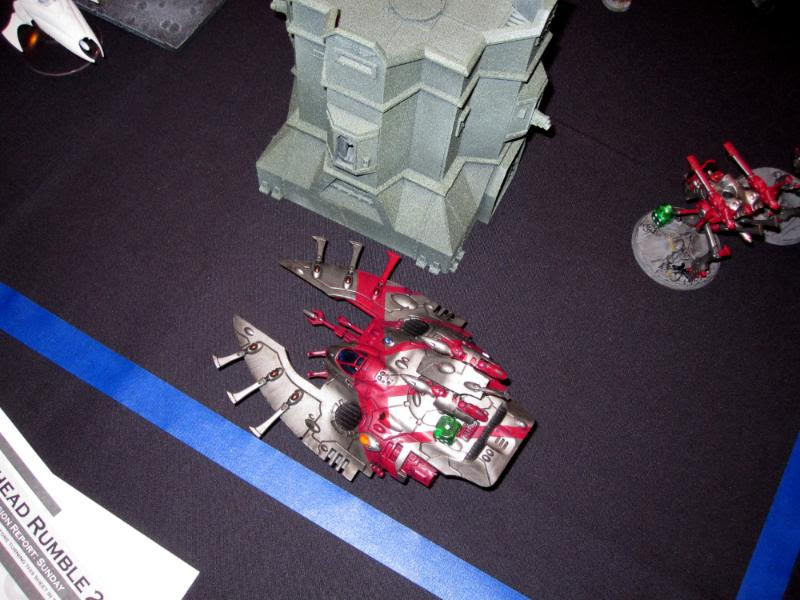 I dump two ravagers into the warwalkers with scatter lasers. I explode one and stun the other two, which get reduced to shaken because of the squadron special rules – but at least they can’t shoot now! 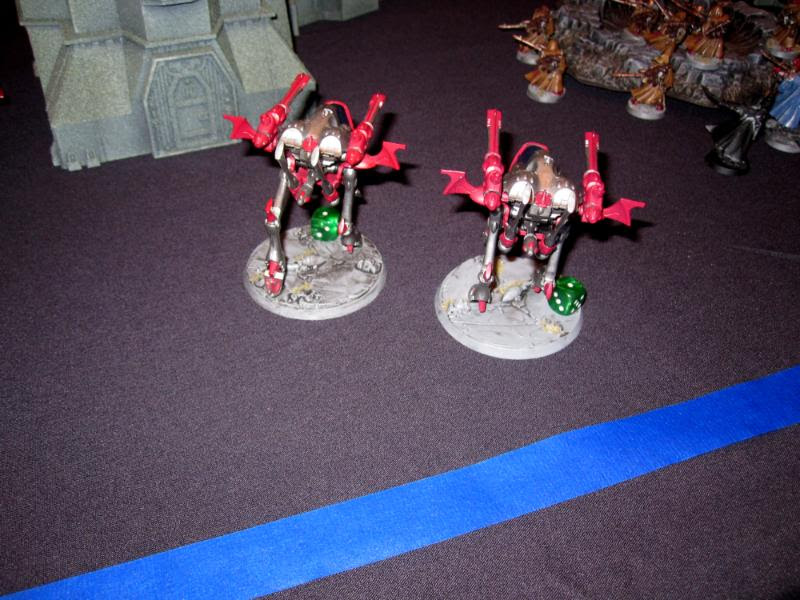 My disembarked trueborn on the central platform are within range of the other war-walkers, and they open up and score a weapon destroyed result on one, and shake another. My ravager follows suit, and only gets one hit, scores a penetrate, and weapon-destroys the already weapon-destroyed one, leaving it weaponless. 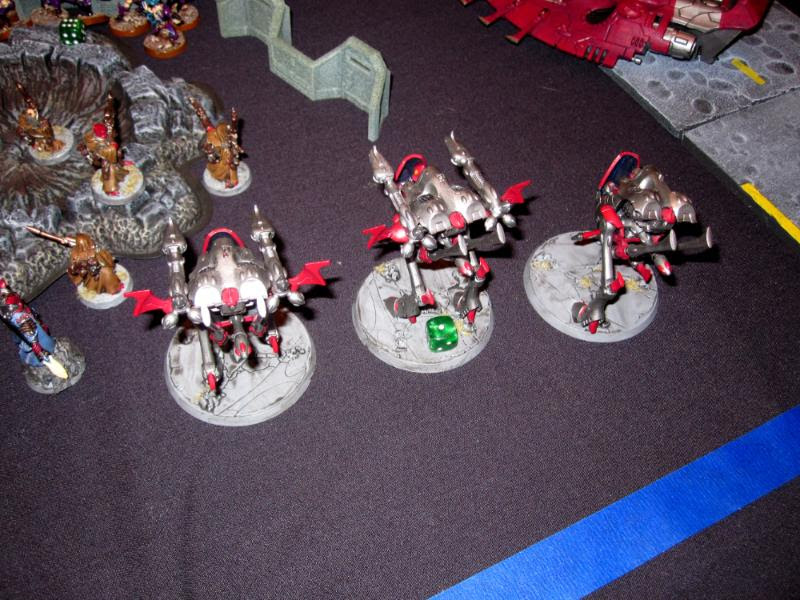 The two warrior blasters on the platform, along with two more blasters from left and right below the platform shoot at the wraithguard wave serpent and only manage to immobilize it. 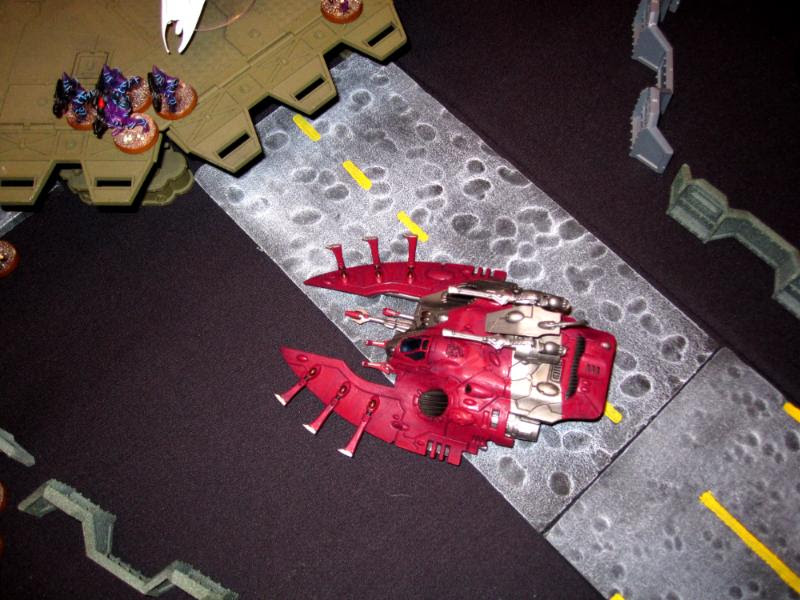 On the far left, my last trueborn unit and the warrior unit by them throw blasters into the storm guardian wave serpent, scoring a weapon destroyed, shaken, and immobilized result. 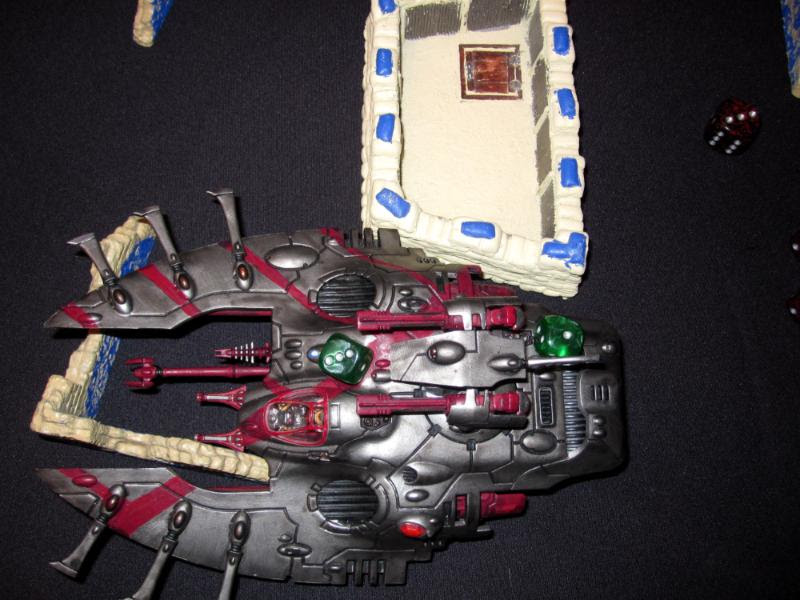 My wyches run 2”! I’m a little concerned that they won’t make it into assault; I’m going to need 5-6” to get in with the pathfinders…and there are two Farseers in there…and the pathfinders are fortuned.
I didn’t fire any splinter cannons this turn. The only available target is the pathfinders, and I have a strange suspicion that even if I punched through the 2+ cover save, he would remove the model(s) closest to me and I’d end up not getting an assault.
I make it into assault! I put all my attacks into the rangers and win combat by three. I’m too far away to bring the Torment Grenade Launcher to bear (my first game using it) to try reducing his leadership, and he passes. 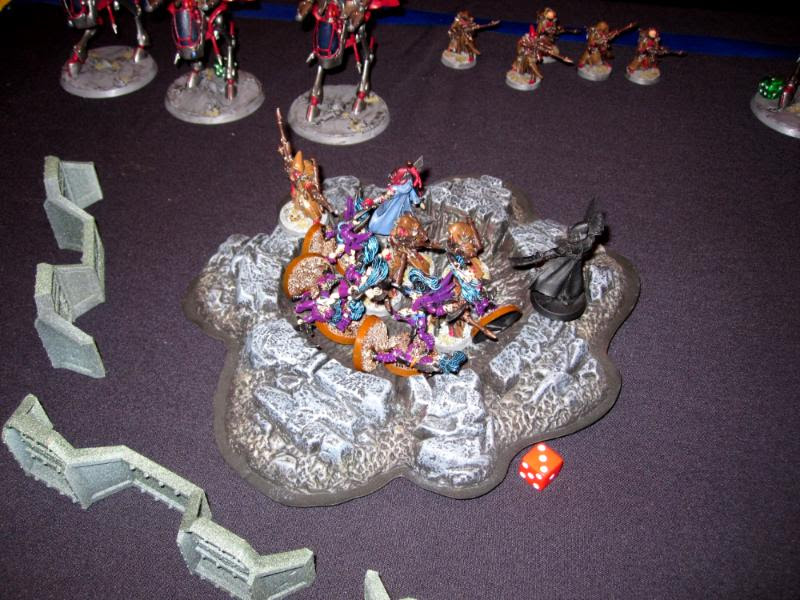 I roll for the central objective and it doesn’t explode.
Enemy Turn Two:
He’s significantly hampered on shooting. Two of his wave serpents can’t shoot, an entire unit of War-Walkers can’t shoot, the second unit only has one that can shoot – leaving him with a single war walker, one wave serpent, and passengers that can shoot at me.
His Fire Dragon Serpent moves up next to my venom and the Dragons disebark to come snipe at my venom. 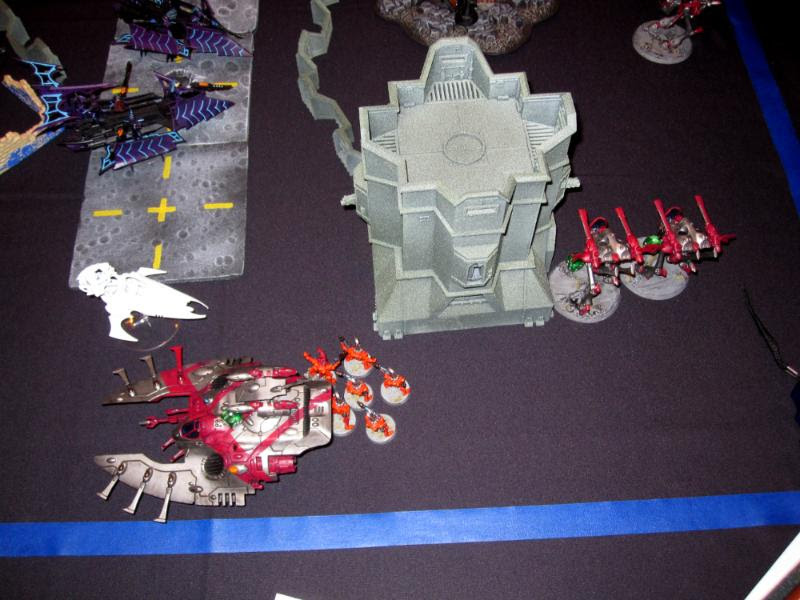 You can also see in that picture that the two war-walkers that are shaken retreat behind the BLOS terrain to try hiding for a turn.
On the far left flank, his storm guardians disembark from his immobilized wave serpent. They 2D6 and move up along the right side of the wave serpent to try getting into range of my trueborn venom with their fusion pistols. 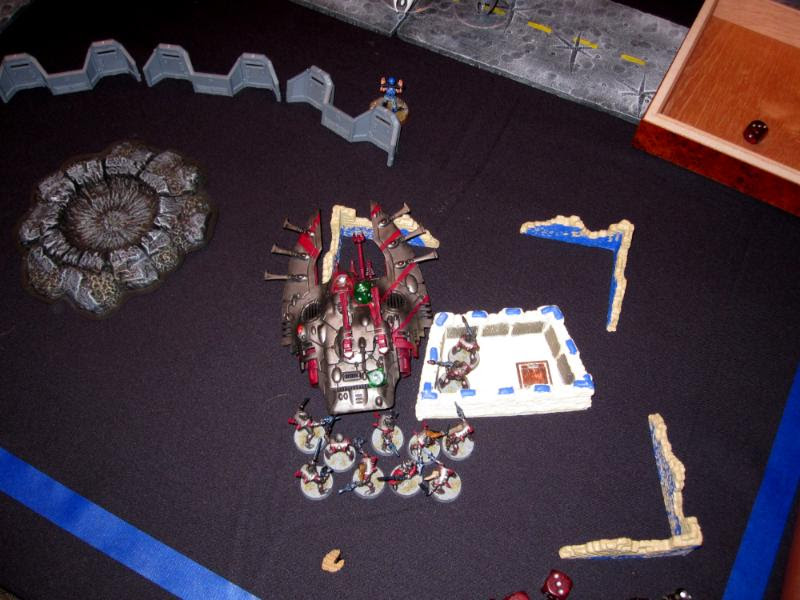 The Wraith Guard get out of their immobilized transport as well. 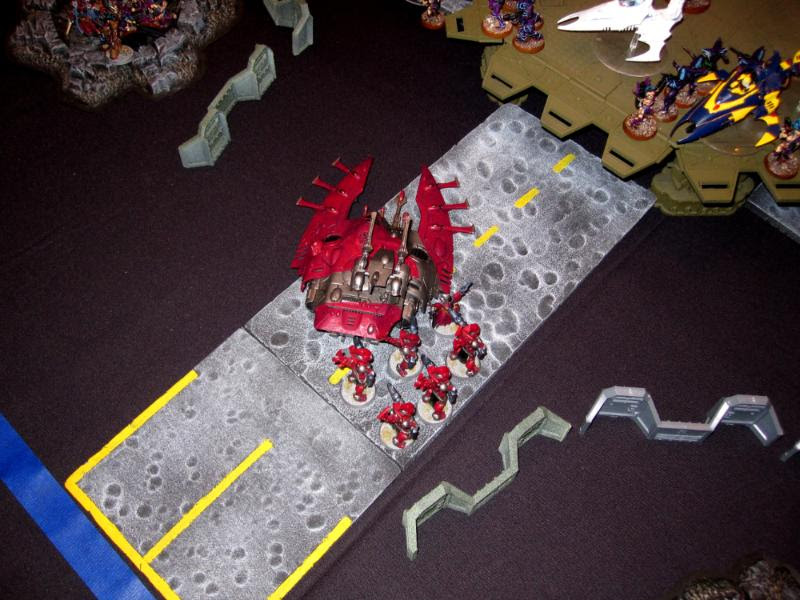 The Wraith Guard open up on one of my troops – they go to ground for 3+ cover – the blaster passes cover, but the rest fail. 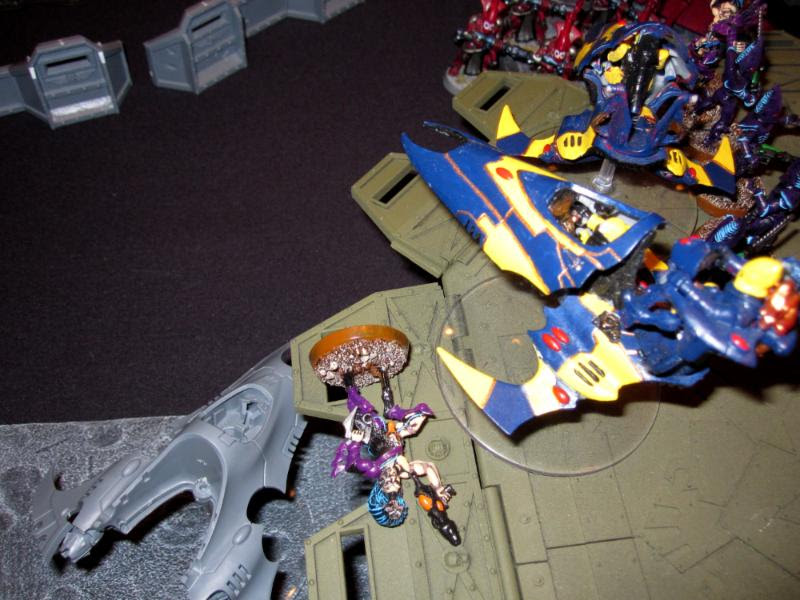 His fire dragons shoot at my trueborn venom; he gets two hits, two penetrates, and I make one flickerfield save. The other one explodes my venom, killing one of the trueborn inside along with two of his fire dragons. I fail my pinning check at LD9. In hindsight, this is going to happen a *LOT* during the tournament. 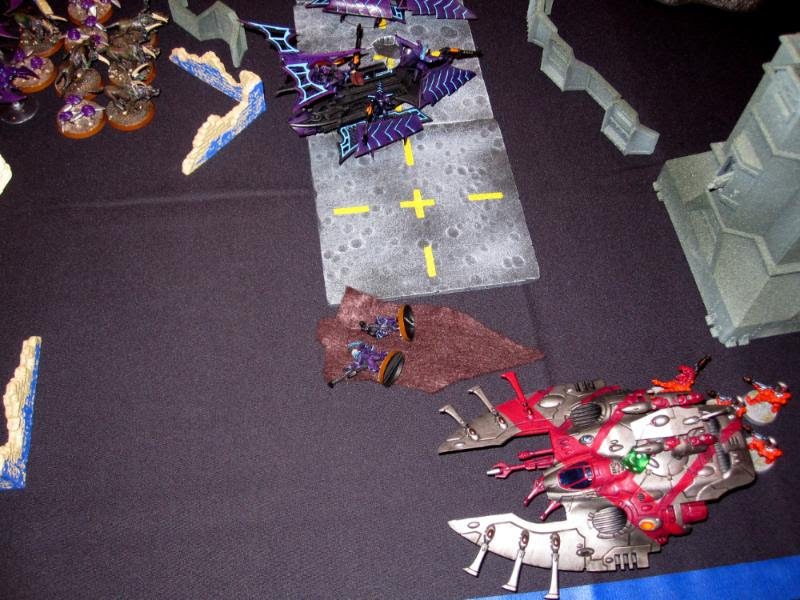 On the far left, the storm guardians shoot at my trueborn venom – both fusion pistols miss, and the other weaponry in range fails to glance my venom.
His remaining war-walker and wave serpent that can shoot both fail to do any damage.
We move to assault! His farseers fortuned themselves and doomed my wyches, but I still manage to score enough casualties to make him LD7 – he fails leadership, attempts to run – and my wyches catch them! Two farseers and 10 rangers – zoop!

I consolidate towards the immobilized wraith-guard wave serpent. The fire dragons are too far away for me to get to, and I’d like to keep them being useful.
Dashofpepper Turn Three:
I close in for the kill.
I’m glad that I risked moving my ravagers up the field – at this point, I’m able to move to angle around the BLOS building to still get clear shots at his war-walkers.
I apparently didn’t start taking pictures until the end of my turn, so some explanation is in order.
Baron Sathonyx detaches from the beast unit and moves off to center field to idle around. The beasts move up 6”. A 12” charge will put them into both the fire dragons and the wave serpent over there, and the trueborn I have over there are pinned…and I don’t want to spend other ranged firepower (ravagers) on the transport if there’s a chance I can take it down in assault since I’d prefer to shoot at war-walkers.
My wyches move over towards the immobilized ravager, and my venoms on the far left move 6” forward so that the units inside them can rapid fire into the storm guardians.
In the center, I shift splinter cannons around to fire on either the storm guardians or the wraith guard, and bring all my warrior units that can into rapid-fire distance of the wraith-guard.
Shooting!
On the left, I dump splinter rifles and splinter cannons into his storm guardians until they are dead. They’re more than half out of cover, and he interestingly doesn’t remove casualties from each unit’s volley to put himself into cover – I think he was hoping to keep the fusion guns alive.
In the center, I drop trueborn blasters, warrior blasters and splinter rifles, and many more splinter cannon shots into his wraith guard until they are dead too.
My beasts fleet and make a 12” multi-assault into his fire dragons and the wave serpent. I wipe out the fire dragons and explode the wave serpent with rending from the razorwing flocks. That, or my Dark Lance from the Wych raider exploded it. I’m not missing any models and don’t see any wounds on my beast unit, so I’m guessing that the wych raider exploded it. 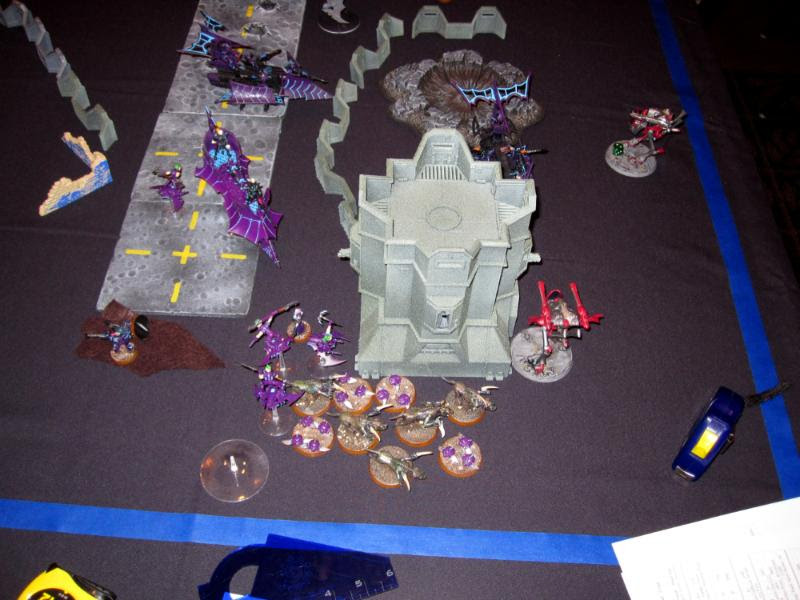 In center field, one of my ravagers swings 12” around the BLOS terrain to shoot at the war-walkers and explodes one, leaving the other unscathed. My other ravager kills a second war-walker and gets a weapon-destroyed result on the other. 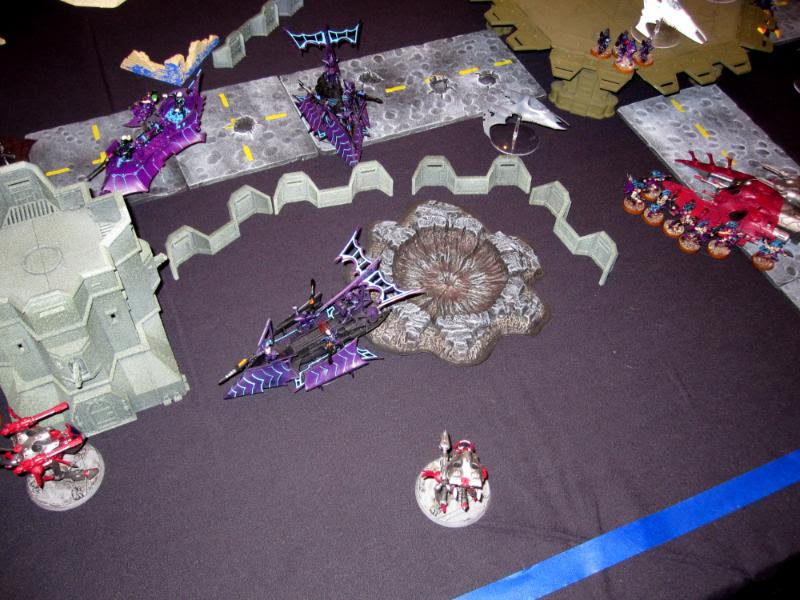 Wych assaults with haywire grenades into the immobilized wave serpents wreck it. 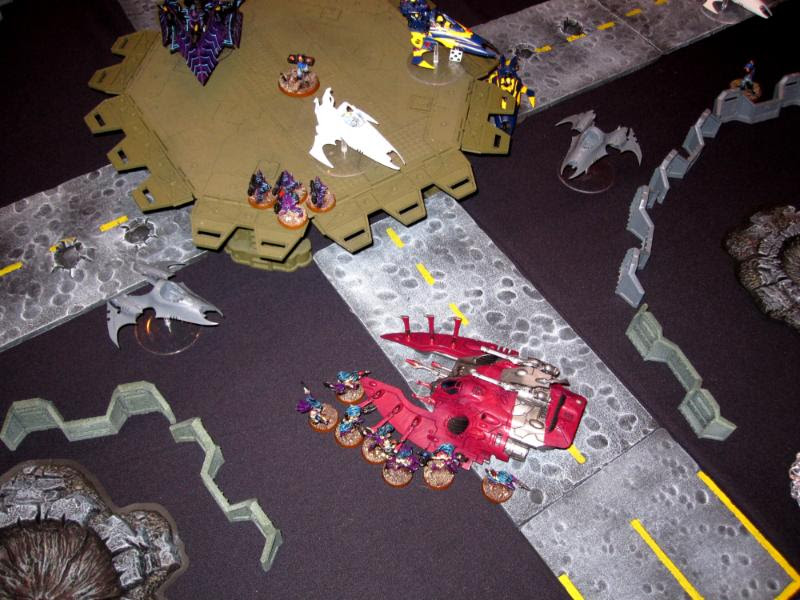 On the far left, my trueborn fail to damage the last wave serpent – but its main weaponry is gone, neutralizing its biggest threat – and the Storm Guardians are left. 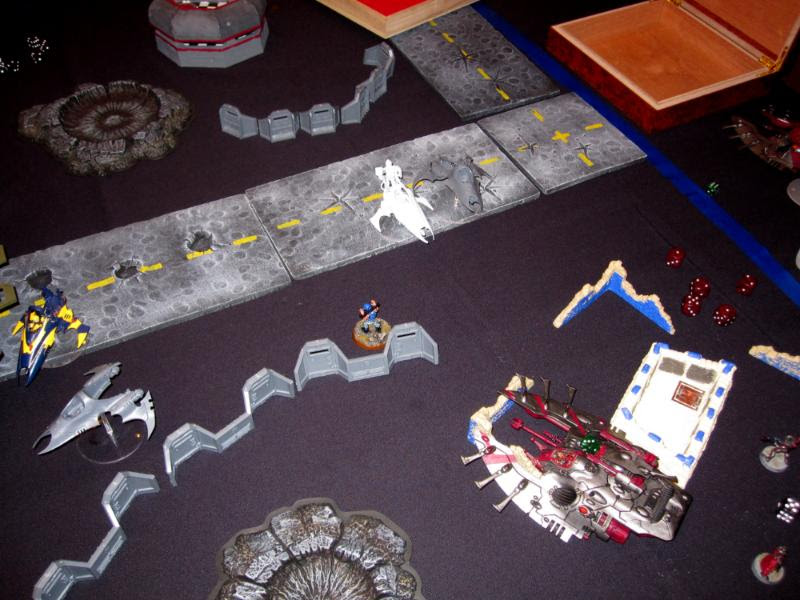 Enemy Turn Three:
Cory has a wave serpent with a shuriken catapult left, and two individual war-walkers – but no troops, so I’ll win the objective mission, I’m only down a single killpoint, and I’ve killed his most costly unit (wraith-guard) while mine are unscathed (beast unit). He gracefully concedes, and we wander over to the other room to pick up Hulksmash and go downstairs to buy breakfast and chat.
Post-Game Tactical Analysis:
Cory’s army isn’t “tweaked” for tournament play – I believe he ended up 0-4 Saturday. Dark Eldar going first in Dawn of War are *extremely* lethal because they can get to midfield unscathed without being particularly threatened. It was a good warm up for the tournament though.
Low point of the game was having to take a 15 minute break in the middle of turn two because I hadn’t been feeling well the day before (or that morning) and I started dry-heaving – had to make a run to the garbage can in the lobby and hang out there until it sorted itself out. I came back to the table with tears streaming down my face and he said, “OMG, are you ok?” And with tears streaming down my face, and spectators ogling me, I sobbed “You just killed my trueborn venom…we were really getting to know each other, and I don’t think I can go on….” It was a good laugh. J
Posted by Dashofpepper at 5:00 PM