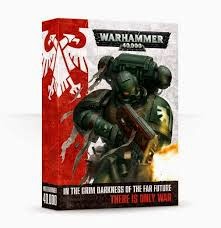 
So 7th is here. I’m going to come out and say I honestly think it solves the major issues. Let’s look at a list I typed up on Dakka the other day in the DCM forum:

-Psychic Phase and an actual decrease in the number of powers that are going to go off per turn (people are freaking out but the math doesn’t lie. It's solidly a rule of diminishing returns the more psykers you bring)

-No switching flight modes for FMC's and assaulting the same turn

-No more extend-o-matic firepower. Weapons can only kills things in a weapons range now. No getting 48" lasguns in a blob with autocannons

-Multiple FOC's at any point level. An improvement on the current system and a system designed for the current release style

-Characters can ride in transports with Battle Brothers and troops can as well. Dedicated Transports can still be ridden by other units, just not at deployment.

-Smash dropped to 1 attack instead of half so landraiders and walkers got a solid boost. -Hullpoints added to buildings so they can now be wrecked -Characters in squads with less than 25% can now rally the like normal

-Jink has to be chosen when shooting at the unit is declared, before any dice are rolled, and you snap fire the next turn in exchange for a 4+ cover save

Yep, that’s a lot of changes and it’s probably not all of them. I’m positive I missed some. Honestly it’ll take 2-3 more reads and a few games to get my feet under me for this edition. Which likely won’t happen until after Bugeater as I don’t want to mix up rules or get sad playing 6th when I want to be playing 7th.

What I’m I seeing? I’m seeing an edition that, if TO’s cooperate and limit the KP’s to the same ratio as the rulebook (looking at you Adepticon) or continue to mitigate First Blood (looking at you Renegade and Nova) where deathstars pretty much get relegated to second tier armies.

Psychic phase helps enormously with the psychic issues from before. Used to be I could bring 2 Lvl1 Inquisitors and prescience my two blobs 81% of the time. Now just to be able to cast it twice I have to roll a 2 on the D6 power dice and then only have a less than 50% chance of getting it off (assuming a 2, higher naturally if I have more dice). Extrapolate from there on the psychic phase and you’ll see the serious nerfing it took overall.

Right now I look around the internet and all I see is people instantly trying to change 7th edition. To put their stamp on how they feel the game should be played based off little to no experience of 7th edition. My plea to the community would be to simply play the game the way it’s been written for a month or two. Get a feel. Build the most broken lists and discuss amongst your peers your experience. Let the edition shake out a bit.

Summoning looks scary but how scary is it against a list with 20 dispell dice and solid offensive firepower?

Double Force org looks scary but is it?

Ally with anyone looks bad but outside of fluff (which most of us could come up with a reason) is it going to be worth eating up the unit + 12”-24” of your deployment zone and forcing your hand on deployment?

Super Heavies are intimidating till you realize that the ranged weapon we all feared so much is now no worse really than an Eldar Distort Weapon with a blast.

Let’s just play 7th for a bit. What do you guys say?

Posted by Hulksmash at 2:57 PM